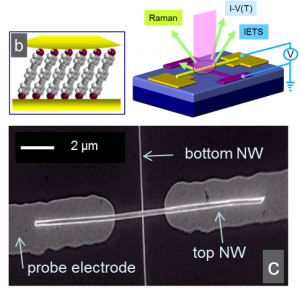 : The use of self-assembled monolayer in advanced (opto)electronic devices provides a whole new degree of freedom to integrate hetero-structural nanomaterials in 3D. An example includes molecular junction devices, where the integration strategy combined a high yield parallel assembly of individually addressable devices with a technique that does not damage the active molecular units during the fabrication. Furthermore, the robust device platform allows in-situ electrical and spectroscopic characterizations to correlate between the electrical properties of the device and the structure of molecules participating in the charge transport using Raman and inelastic electron tunneling spectroscopies. 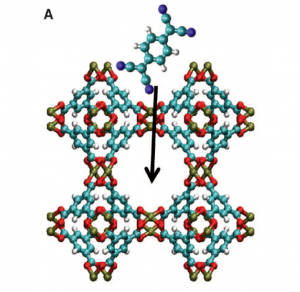 We are interested in electrical characterizations of a metal-organic framework (MOF) materials. By adding a tetracyanoquinodimethane (TCNQ) molecule to their framework, the electrical conductivity of the MOF increases by over six orders of magnitudes. This development could have profound implications for the future of electronics, sensors, energy conversion and energy storage.